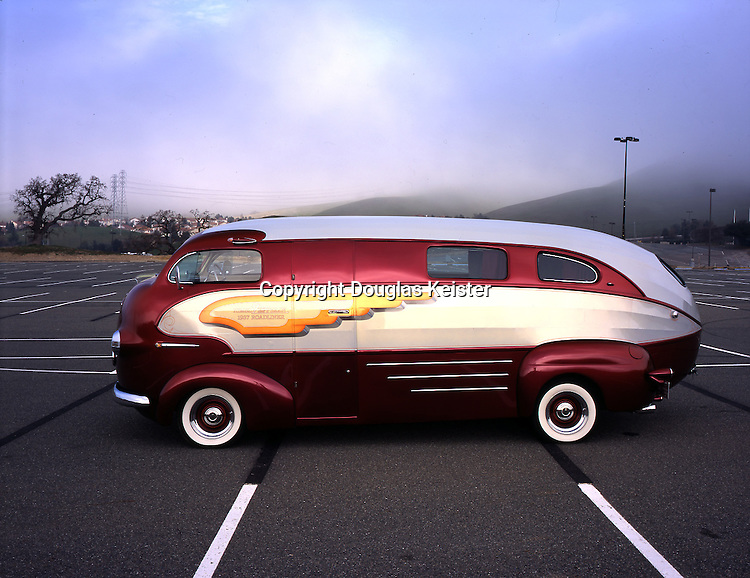 It’s hard to believe that this stylish motorhome was built in 1937. Dubbed the Zeppelin by its current owner, famed customizer Art Himsl, the Zeppelin started out its life as a prototype house car built by a mechanic at the Chris-Craft boat dealership in San Francisco. A San Francisco doctor who had high hopes of manufacturing a number of them commissioned the vehicle, but World War II material shortages effectively ended his quest. Although this is certainly a unique vehicle, records show that it was registered in 1942 as a Plymouth house car.

Himsl discovered the vehicle in 1968 when he and his friend Ed Green saw the aft end of it sticking out of a barn in California’s Napa Valley. Himsl and Green used the vehicle for a few years as sort of an office, but they did not begin a serious restoration until 1999. The first order of business was to refurbish and modernize the drive components. Air-lift bags were added to all four corners, a 350 Chevy engine replaced the old flathead engine, and most of the old running gear was replaced. The original skin on the vehicle was a mixture of steel panels and stretched fabric. Himsl ripped off all the old skin and replaced it with a modern material Stitz Poly-Fiber. Fenders were replaced (the original vehicle did not have front fenders), the nose was reconstructed, and Himsl applied a spectacular finish in an Art Deco theme. The vehicle was rechristened in 2002 as the 1937 Himsl Zeppelin Roadliner. Photographed in Concord, California.
Douglas Keister