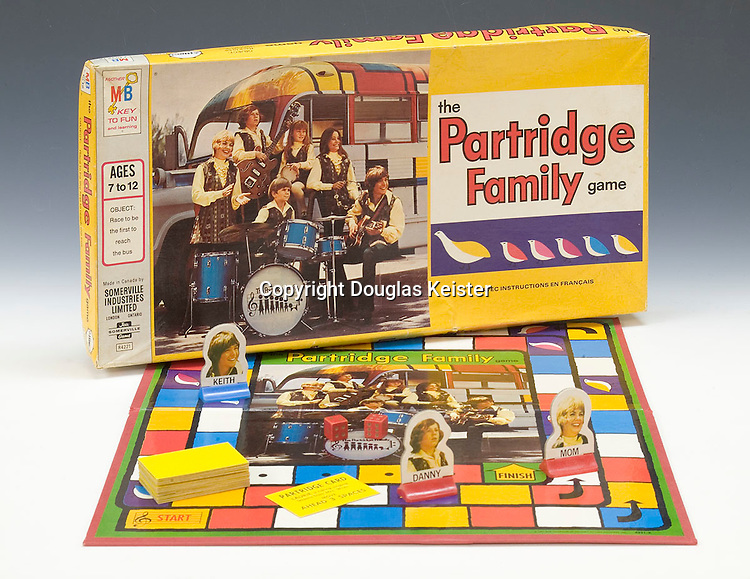 The Partridge Family, a sitcom that featured a widowed mother and her five children that aired on ABC Television from 1970 until 1974, had its own version of a brightly painted hippie bus. Appropriately the bus was painted in a more geometric (square) pattern than the free-flowing designs of the hippie buses. In the series, the Partridge family acquired a 1957 Chevrolet school bus from Al’s Used Cars because they needed a vehicle to transport them and their equipment to a gig at Caesar’s Palace in Las Vegas. The family painted the bus in a geometric-style reminiscent of Dutch painter Piet Mondrian, and they were on their way.

After the show’s demise, the bus went through a series of owners and eventually wound up lame and abandoned in the parking lot of Lucy’s Tacos in east Los Angeles. A short time later, it was junked. When David Cassidy, who played Keith Partridge on the original series, went on a revival tour in 1993, he traveled in a look-alike bus. Another copy of the original bus can be seen at Universal Studios in Florida. For the Partridge-trivia minded, the rear of the bus sported license plate number NLX 590 and a sign that read, “Careful, Nervous Mother Driving.”

The Partridge Family series generated a number of spin-off products, including records, refrigerator magnets, lunch boxes, books, posters, and games. In The Partridge Family Game, each roll of the dice can potentially put a family on their way to getting on the bus and winning the game, or could make the family land on one of the birds and be subject to drawing a card that could put them in peril. For reasons known only to the game’s inventor, drawing a Partridge card that says, “LAURIE belongs to the ‘now generation’,” causes the contestant to lose a turn while drawing a card that says, “MOM likes to sing in the shower,” advances the player six spaces.
Douglas Keister