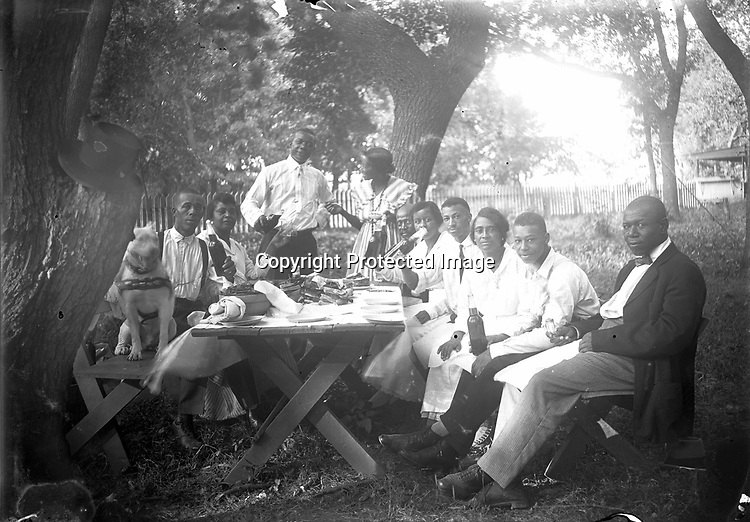 BACKYARD PICNIC. In a backyard enclosed with a picket fence, 10 picnickers (and one pit bull terrier) pause for a toast before their meal. The scene appears casual, but the picnic benches have been angled out from the table to allow each person to be seen, and to lead the eye to the couple serving as host and hostess

INFORMATION CONTRIBUTED BY STAN SCHMUNK 8/20/2018: The first gent seated on the left is William David Black who owned a home at 708 N. 13 st. He was born in 1876 in Mississippi where his parents had been slaves. In 1908 he married Ella Goodlow in Grand Island, Ne. In 1910 he was shown as a worker in a stone quarry in Weeping Water. By 1920 he owned a little home in Lincoln and was working as a barber. By 1925 his wife was a widow. I found no info on what happened to William. The couple had numerous children. The two young men seated on the right who look like each other and William are Theodore the older and Harry the younger. The widow moved east to live near 24th & Q where she also owned the home. She died in 1937 and is buried in Wyuka. I think she may be the woman seated next to William but can't be sure. At least two of the children ended up in Los Angeles and are buried there.