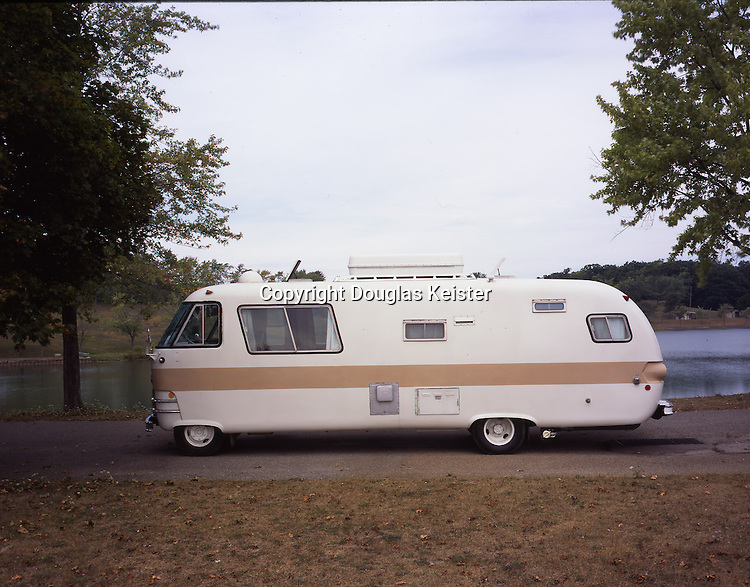 The Frank Motor Home, Dodge, and Travco
In 1958, Raymond and Ronald Frank, who lived in Brown City, Michigan, built a motorized all-weather recreational vehicle for family vacations. The father/son team’s creation so enthralled the folks around Brown City that between 1958 and 1960 they constructed, using their barn as a factory, seven custom-made motorhomes for their friends. Their creations needed a proper name so they simply christened them the Frank Motor Home. By 1961, Raymond and Ronald became managing partners in their own company. Raymond’s wife, Ethel, took on the role of office manager and secretary.

In the first year of operation, the family churned out 160 units. The wood and aluminum bodies, which were mounted on a Dodge chassis, came in 20-, 23-, and 26-foot lengths and sold for between $6,500 and $7,300. In 1962, the Franks formed an alliance with Dodge, and thanks to the infusion of funds by the automotive giant, they were able to develop the tooling to fabricate an entirely new body made out of two huge 27-foot pieces of fiberglass. This streamlined design, which looked like an enormous version of the egg that holds Silly Putty, was a marked deviation from the boxy limited production house cars of the past. In order to further expand the Frank Motor Home’s market appeal, it was decided that a more identifiable name would be needed and in 1963 the vehicle became the Dodge Motor Home. Two years later, the motorhome went through another incarnation when the company was sold to Detroit businessman Peter R. Fink who renamed it the Travco.

Through all the ownership and name changes, the quality and desirability of the Travco remained high, chiefly because of its rustproof fiberglass body and innovative features like its optional sewage incinerator system, the “Destroilet” gas incinerator-type toilet that almost eliminated the need to empty holding tanks. There were problems to be sure: the 318-cubic-inch engine in the early models had to wor
Douglas Keister