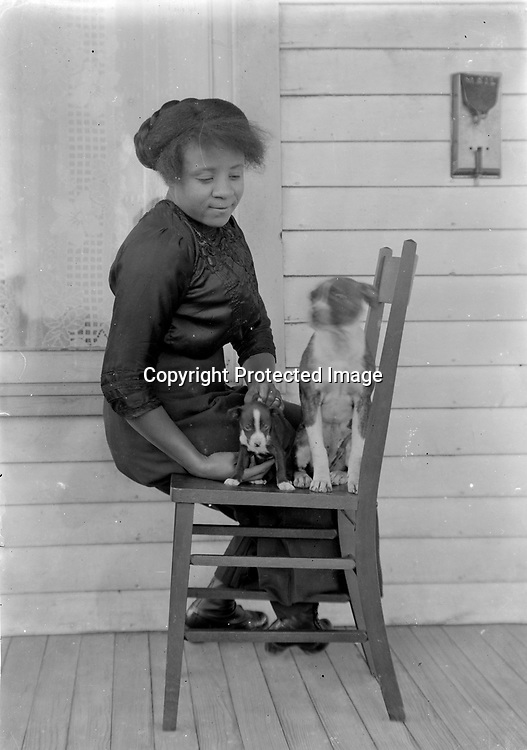 FRANCES HILL WITH PUPPIES. A frequent subject in Johnson's photographs, Frances Hill
(1904-1932) graduated from Lincoln High School in 1924. She was listed in the city directories even before graduation, implying that she supported herself, first as an usher at Rialto Theater, then later as a stock girl for Rudge and Guenzel department store. Ruth Folley (see image LB081) remembered Hill eight decades later as a dear friend in high school. She married Bert Taylor around 1930 and moved to New York City, where she died just two years later at age 28.

The 1920 census shows Aaron Douglas, 21 year old University student, was a roomer in the household of Ben. F. & Lottie Corneal. Ben was head of the waiters club of Lincoln; a second roomer was a barber. They resided at 524 N. 9th--a couple of blocks south of Mamie Griffin's house at 915 U. The Corneals next door neighbors were John and Mable Galbreath at 524 N. 9th. John was sometimes a waiter; in 1920 he was listed as operating a restaurant. John and Mable also had a roomer, as well as a stepdaughter--15 year old Frances Hill.