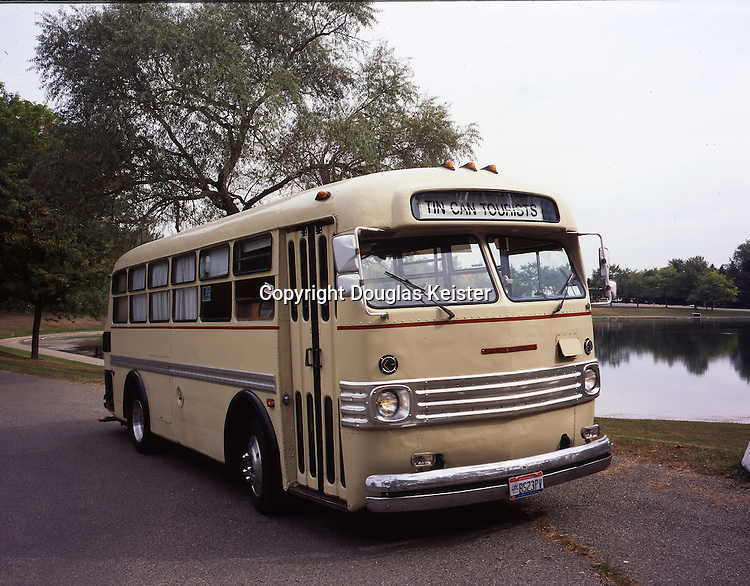 Few American companies have been in business as long as Marmon-Herrington. The company got its start in 1851 as the Nordyke and Marmon Machine Company, a manufacturer of flourmill machinery. The Marmon name became much better known when the company began manufacturing automobiles at the beginning of the twentieth century. The Marmon Wasp won the first Indianapolis 500 race in 1911, and the Marmon Sixteen (a 16-cylinder sedan) was one of the most luxurious automobiles in America. The Great Depression took its toll on the Marmon Car Company. The business decided to employ the services of Arthur Herrington, a retired colonel and military engineer, and concentrate its effort on the manufacture of more utilitarian transports like military vehicles and buses. The company changed its name to Marmon-Herrington. Though still in business, the company no longer manufactures busses. Their main business today is designing and installing all-wheel-drive systems for large trucks.

This 26-foot 1953 Marmon-Herrington spent most of its life as a transit bus before its current owner purchased it for $100 in 1971. The conversion from bus to motorhome was done at a leisurely pace over a period of ten years, starting with the installation of a 1958 430-cubic-inch Lincoln gas engine and a 4-speed automatic transmission. The owners have traveled all over the country in their motorhome and were among the first members of the renewed Tin Can Tourists. In appreciation of their dedication to classic RVs, Wilma and Bill Svec were inducted into the Tin Can Tourists Hall of Fame. Photographed in Camp Dearborn, Michigan.
Douglas Keister