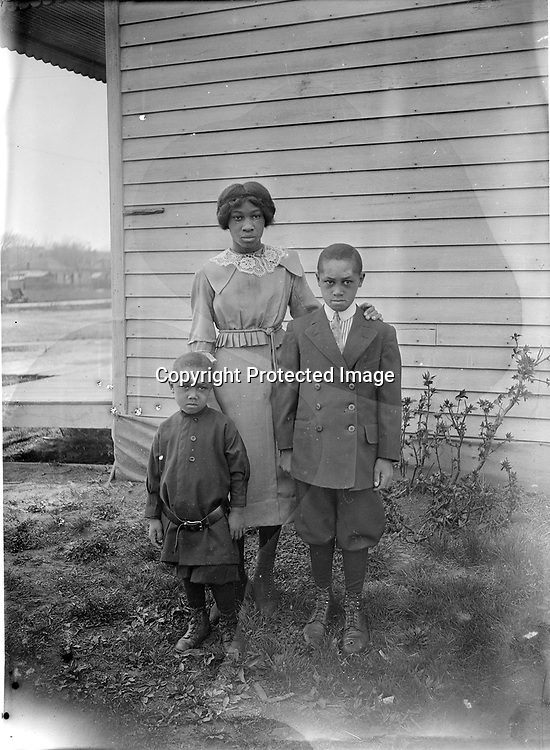 SISTER AND BROTHERS (see addendum below). The two boys, probably brothers, are dressed quite differently, reflecting their ages. The younger fellow wears a long tunic over his knickers, while the older boy has a double-breasted coat, shirt, and tie--plus knickers. The young woman wears a tailored dress, lace collar, and button shoes. There were several seamstresses in Lincoln's African American community.

Information added by Stan Schmunk February 2017:
I've positively identified her as Gladys Easley. The older boy is her brother James Richurd while the younger boy is her nephew Willard Arthur, the son of Gladys' older brother Clifford, who was a widower. Gladys was born in Lincoln in 1906 and passed also in Lincoln in 1948. Her grandfather, David, was a Civil War hero, who fought for the 1st Kansas Col Infantry (later the 79th USCT. This group endured a horrible slaughter but David survived and moved his family to White Cloud, Kansas in 1865. In 1871 a son, Jerome, was born. David passed sometime between 1875 and 1880. By the late 1890s Jerome was in Omaha and in 1901 he moved to Lincoln. He was a sometime policeman and common laborer. Gladys never went to high school and worked her entire life as a domestic, seamstress, cook, etc. including working for a NU fraternity.