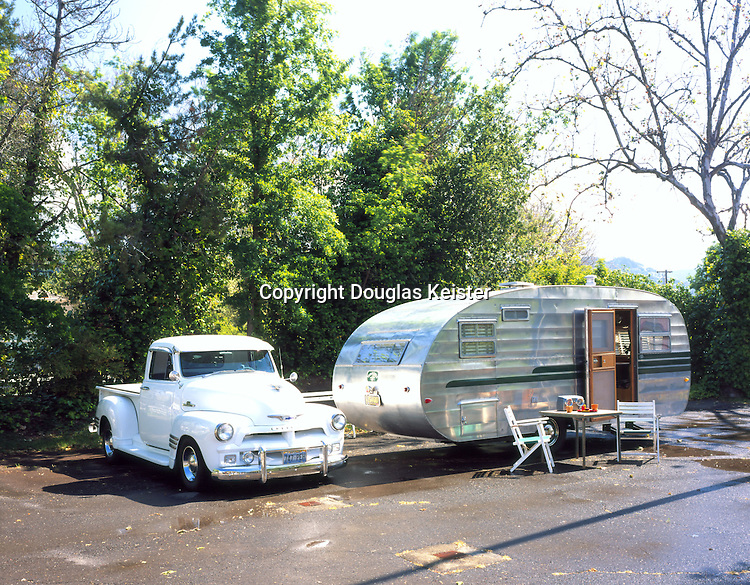 1954 Traveleze
Traveleze can trace its roots to 1931 when southern Californian Kenneth Dixon constructed a trailer from parts of a wrecked 1928 Essex automobile, some scraps of wood framing and some plywood. Dixon, put a "for sale" sign on his creation and it quickly sold. The speed of his first sale convinced Dixon to hang out a shingle as the Traveleze Trailer Company, which sold trailers directly to customers from his Los Angeles factory. During the next few decades Traveleze expanded its production and was well known as an innovator in the industry. In the late 1940's Traveleze introduced the first gas refrigerator and in 1948 they introduce the first production motor home by mounting one of their trailers to a truck chassis. Traveleze weathered the crippling times of the 1970's (oil embargos and soaring interest rates) but eventually went out of business in 1990. In 1998, RV industry giant, Thor Industries resurrected the Traveleze brand.

This 1954 Twenty-one and a half foot Traveleze was found, by its current owners, in a field on an Indian reservation near Bishop, California. They had previously owned a smaller Traveleze so were well acquainted with the quality of the trailer. The trailer was a "park" model, so in order to convert it to a true travel trailer they needed to add holding tanks for fresh water and gray/black water and added 12-volt circuitry in addition to the 120-volt wiring. The owners did a lot of the cosmetics themselves, but turned over the wiring and refabrication of some of the exterior panels and doors to Carl Hagen, who they describe as a metal wizard. The paint scheme as well as the decal design is original. The Traveleze trailer is owned by Susan and Dan Cutright. The 1955 Chevrolet First Series Advanced Design Pickup is owned by Mike and Debbie Smith. Photographed at the Silver Social, Calistoga, California.
Douglas Keister