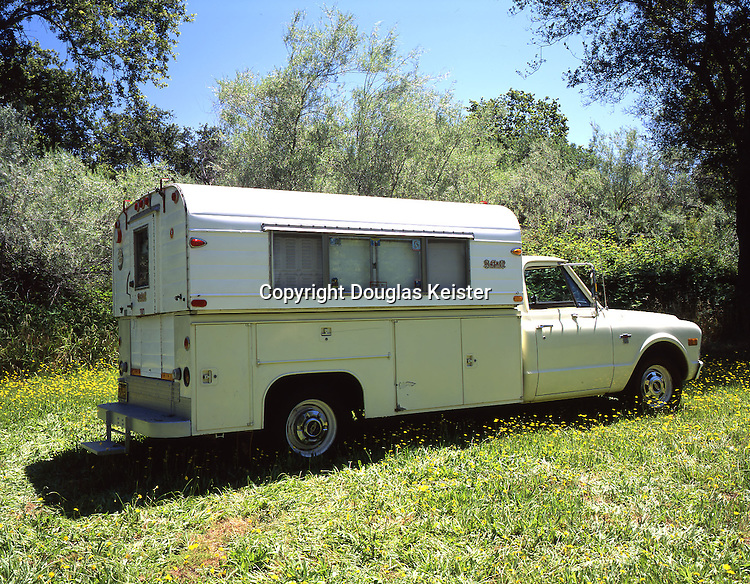 Without a doubt, one of the most interesting camper innovations was the hydraulically assisted popup camper. The camper was the invention of R. D. Hall. Hall grew up in Rochester, New York, attended the Rochester Institute of Technology, and then served in World War II. After the war, he settled in California but yearned to explore Alaska. He knew that accommodations in Alaska were few and far between and the trip to Alaska on the Alcan Highway presented its own set of challenges. Mindful of the challenges that laid ahead, Hall designed and built a camper for the three-month trip.

Hall’s design attracted so much attention and acclaim that he started formally building the campers under the Alaskan Campers name in 1958. By 1962, there were five factories in the United States and two in Canada manufacturing the campers. The major element that separated the Alaskan from other campers was the telescoping roof that was operated with a hydraulic assist. The clever idea of having a telescoping top, which has since been widely imitated, allows for generous headroom when camping and provides a more ground-hugging streamlined profile while in motion.

In its advertising, Alaskan capitalized on the advantages of having a camper instead of a trailer: “No license is required for the Alaskan Camper. It is lawful to carry passengers enroute. Passengers may rest or sleep in ample comfort, play cards, etc., while the miles go skimming by.” The advertising, however, does not mention how those activities are comfortably accomplished with the top in the retracted position.

Alaskan Campers are still being manufactured and continue to be regarded as one of the most durable and quality campers on the market. They are available in 8- and 10-foot lengths. The 1967 8-foot Alaskan Camper and 1968 Chevrolet truck with a Serves utility body are owned by Milton Newman. Photographed at the Travnikar Dandelion Sanctuary, Penryn, California.
Douglas Keister