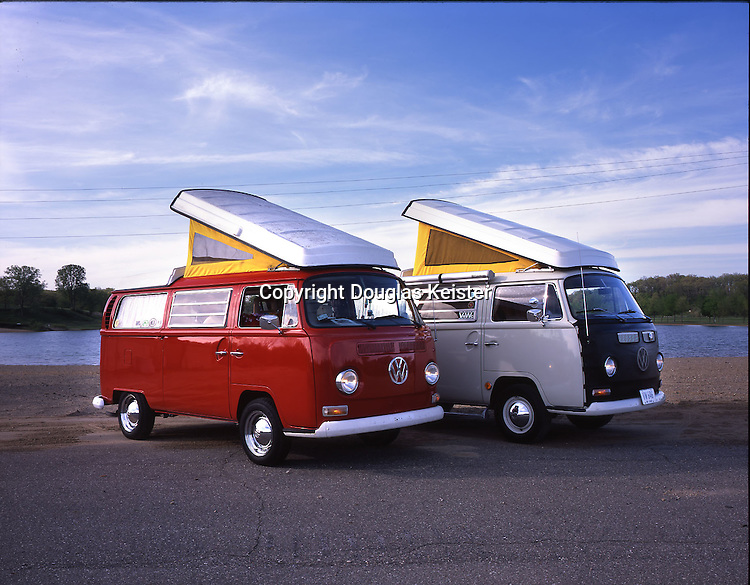 Two 1969 Volkswagen Westfalias exhibit their pop-up sleeping compartments. John and Mary Jane Merschdorf own the pearl white van. Chuck and Donna Simpson own the red van. Both were photographed in Camp Dearborn, Michigan.

It’s safe to say that the most well-known and enduring imported vehicle is the humble Volkswagen. The beginnings of the Volkswagen can be traced to arch bad guy Adolf Hitler, who desired an affordable automobile for the German people. One of Hitler’s goals for his new society was to build autobahns modeled after wide American roadways. But what good would his autobahns be without vehicles? At the time, the only people who had automobiles were wealthy Germans, yet there were very few of these folks. In 1934, Hitler personally proscribed the design specifications of what would be known as the people’s car, the volks wagen. Ultimately, the design was turned over to Dr. Ferdinand Porsche, who would go on to design the renowned sports cars that carry his name. The first Porsche-designed Volkswagen rolled off the assembly line on August 15, 1940, and production continued throughout World War II. Most of the units produced during the war were German army vehicles known as Kubelwagens and amphibious vehicles known as Schwimmwagens. Despite the widespread destruction of German industries by the Allies, the Volkswagen factory, located in Wolfburg, Germany, was up and running by late 1945. In 1947, the first Beetle was offered to the public.

By the late 1940s, Volkswagen designers were looking into the possibility of building a larger van-like vehicle. The original design is credited to Ben Pod, a Volkswagen importer from the Netherlands who sketched his design on a cocktail napkin in April 1947. By 1949, eight bus prototypes known as Transporters, or Bullis, were tested, all powered by a modest 25-horsepower engine. Six of these of these were dubbed Panelvans, another was called a Kombi, and the eighth was named a Microbus. The Transporters were an
Douglas Keister