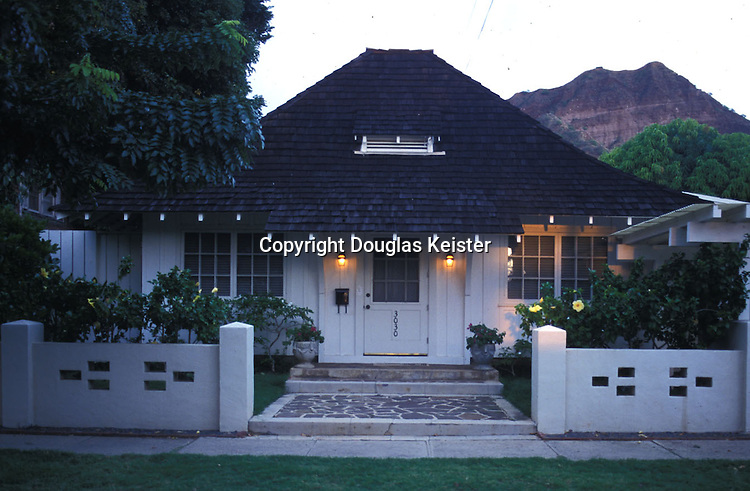 CW Dickey House 3030 Kalakaua Ave 96815
Placed on Historic Register 11/1/84
Diamondhead in background Charles William Dickey bestowed upon Hawai`i a remarkably rich architectural heritage. As the long list of his designs would attest, he is noteworthy by any criteria: variety, quantity, quality. His legacy includes many of the buildings which, today, are considered among Hawai`i's best architecture and also extends beyond his own work to the influence he exerted on other prominent architects who began their careers in his office.
Born in Alameda, California on July 6, 1871, C.W. Dickey was brought at the age of two to the island of Maui, where his parents established a general mercantile store. His mother, the former Anne Elizabeth Alexander, came from a kama`aina family, her father being one of the early missionaries to arrive in Hawai`i, the Rev. William P. Alexander.
Dickey grew up in Haiku, Maui. Returning to the United States for his education, he attended Oakland High School and graduated from the Massachusetts Institute of Technology with a BA in architecture in 1894. He worked briefly with two American architectural firms and in 1895 he entered into partnership with Clinton Briggs Ripley of Honolulu. With the new century he reformed the firm of Dickey & Newcomb, also in Honolulu, but at the end of 1904 he moved to Oakland, California, where he opened an architectural office for the next 20 years.
From as early as 1899 Dickey expressed the concern that an architecture suitable for Hawai`i's environment be developed and it is this sensitivity for which his architecture is best remembered. He strove in his turn-of-the-century residential work to design houses in which "the culture of the people has asserted itself." He stressed the need for broad lanais, interior courtyards and fountains, and felt that the "California Mission" style of architecture "is certainly most appropriate for Hawai`i."
In these early years of Dickey's career, the implementation of such i
Douglas Keister