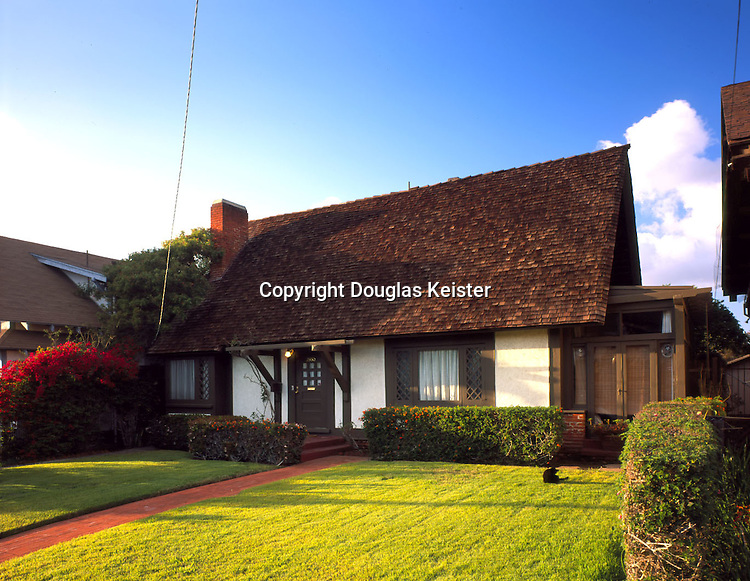 “The Strong House”, San Diego, California. This house was designed by local architect Emmor Brooke Weaver (1876-1968), a relocated Iowan, whose work is characterized by its eloquent expressions of simple wood construction, and is also associated with the Arts and Crafts movement. Clearly inspired by an Elizabethan cottage, it was constructed in 1905 for the William Hugh Strong family, and is still occupied by a family member. English influence abounds in its shingled roof, detailed to suggest a thatched roof by its rounded edges. Barely visible in this view, there is half-timbering in the gable end. Adapted from the English Tudor style, the method of wood construction used here uses real, not sham, structural elements to express its design, which are visible both inside and out. The glassed-in porch at right, enclosed in 1920, was once an open pergola. The interiors of the house feature dark beams
and woodwork against light-colored walls, numerous built-ins, and original surviving insets of burlap in its dining room wainscot. A larger house than it appears, the second floor bedrooms are oriented away from the street. Other than as the Strong house, it has sometimes been known locally as the “Anne Hathaway” or “Elizabethan cottage”.
RELEASED
Douglas Keister