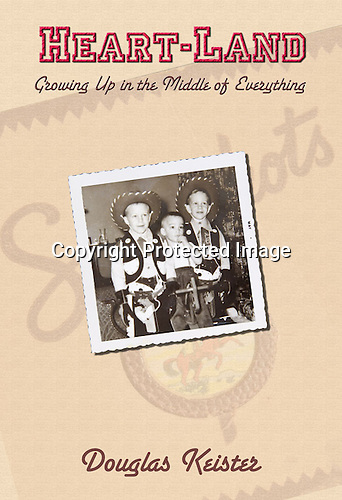 Chico, CA, October 2013. After authoring and co-authoring over three dozen books, critically acclaimed writer-photographer Douglas Keister looks back at his childhood years growing up in Lincoln, Nebraska in the 1950s in his new book, HEART-LAND: GROWING UP IN THE MIDDLE OF EVERYTHING

The genesis of HEART-LAND was a series of popular North State Voices newspaper columns Keister wrote as a guest columnist for the Chico [California] Enterprise Record in 2011. His musings were often peppered with tales of growing up in America’s Heartland as one of millions of what he called Free-Range Baby Boomers. The heartwarming and often hilarious stories spoke of a simpler time when children invented their own games, had a somewhat skewed but enchanted view of the world outside their communities, and awoke each day with a sense of wonder.

For HEART-LAND Keister has expanded his newspaper columns to include twenty kid-specific topics including, Christmas, insects, weather, the birds-and-the-bees talk, family vacations, a stint in the Cub Scouts, early television programs, the loss of innocence, school and much more.

HEART-LAND: GROWING UP IN THE MIDDLE OF EVERYTHING,  is a magical blend of humor, insightfulness and heartfelt memories. The stories range from laugh-out-loud funny to rueful recognition of the pains of growing up. All of them are full of heart, and never fail to entertain.

If you grew up in the middle of the twentieth century, you’ll love HEART-LAND. The author is available for interviews, lectures and book signings.

Doug Keister has written a sweet, hilarious collection of essays about growing up in the middle of the country, in the middle of the century, as a middle child. Although I am only one of those (and not male), I SO relate. But what makes the book most enjoyable is the writing--whether he's relating the "paper drive incident", a family road trip to Disneyland, or that rite of passage talk about the birds and bees, Doug's style is compulsively readable, laugh out loud funny, and clever.

Dare I compare him to writers such as David Sedaris? I can say that I derived equal enjoyment, maybe even a tad more, from Heart-Land. These are truly endearing and entertaining stories, and will be enjoyed by anyone who has grown up, anywhere, during any decade (or is still in the process of trying to do so).
Very enjoyable read September 14, 2013

I really enjoyed this book. It was a very honest, humorous and real look at growing up in the 1950's and how those events and memories have shaped and stayed with the author. It is a quick read, full of personal stories and memories which make it so much more enjoyable and real. There were parts that had me laughing aloud, and others that had me sitting back and reflecting for a few moments. While I was born a few decades later, this book still stuck with me on a level and was something I enjoyed reading.

Walk down memory lane.... September 13, 2013
By GamGam
Took me back to my childhood. A time when we went outside to play right after breakfast came home to eat lunch and went right back out until dinner time. No video games, we played kick the can, red rover, tag, etc. We didn't sit around all day watching TV, that consisted of 3 network channels and a PBS channel. It reminded me of going to the drug store to get penny candy and sitting at the counter soda fountain. A time of innocence that sometimes would be nice to go back to.


Nostalgia, childhood memories September 12, 2013
By Edie Anderson
Reading Heart Land brought back so many childhood memories of growing up in the mid-West. Wonderful stories and situations that made me laugh and remember how it was to grow up in middle America. A specific story had me rolling with laughter because every child remembers that loose tooth that just wouldn't come out and you needed help, but didn't want anybody to touch your tooth for fear it would hurt too much. We all have been there, the authors sense of humor and his writing style truly bring you back to a time when family's were closer and spent more time together. Heart Land brought me back to those early years of childhood innocence.

There was no sex in Lincoln, Nebraska in the 1950’s. Babies arrived bundled in a sheet via a stork with a Western Union cap. I have a number of cards heralding my arrival sent to my parents from friends and relatives with that very image. Babies, as I was to learn some years later, require pregnancy and pregnancy required sex. There were no pregnant women in my little corner of Lincoln, Nebraska, therefore, there was no sex. The word pregnant was never uttered in middle-class households in our neighborhood. At the very most there would be hushed tittering when the phrase “in the family way” was spoken.

When a woman became pregnant and began “to show” she was shuttered away for some months because of her delicate condition. After the proscribed amount of time, she disappeared under cover of darkness and returned a few days later in more or less the same condition and shape she was in when last sighted. The only difference was she’d have a clutch of cards with the image of a stork and a miniature human being in tow.

Even on television, that window to the world beyond our sheltered neighborhood, there was no sex. There were only vague references to sex, but it required an educated and keen ear  (something I was slow to acquire) to pickup the secret code words that hinted at connubial activities. The bedrooms of TV-land’s marrieds, when seen at all, always had separate twin beds.

Of course, as we all found out later, there was a lot of twin-bed-hopping going on, most notably between Lucy and Desi. Lucy was pregnant with her first child during the filming of the pilot. Then, after shooting began for the second season she got pregnant again. The writers and producers had to scramble for a storyline when Lucille Ball started showing the effects of her activities. They finally decided to incorporate her pregnancy into the show, except the word pregnant or pregnancy was never used. Lucy was simply “expecting”.

About this time our family switched to Father Knows Best.

We certainly knew there was a difference between men and women. One would have had to be blind to ignore the twin paraboloids carefully molded by the manufacturers of bullet bras and the primitive samplings featured in back issues of National Geographic magazine. However, these differences had little to do with sex and were more a matter of curiosity.

The inherent curiosity did of course spark further inquiry and for that we’d turn to the older and wiser brothers of our friends (my older brother didn’t have a clue). When we posed our questions to our elder siblings we were met with rolling eyes, smirks and all manner of behavior and insult that signified their superiority over us. This was followed by the admonition that the answers to our questions were not meant for mere children and in the unlikely event that we ever did progress beyond childhood, the day would come when we’d be taken aside by our fathers for “the talk”.

Everyone in our circle knew about the talk. We’d seen it happen to our friends and siblings. It was something to both look forward to and dread. One day our older male friends would go to the secret place with their father and a few hours later they would emerge with the knowledge of the great secret of men and women.

That secret, rather than being a wondrous revelation, turned out to be a heavy burden. After the talk our friends seemed to have lost something rather than gained it. Their steps were a bit slower, their backs a bit more bent. They tried to cover it up with their smirks and haughty air, but what we saw were boys and young men weighted down with knowledge.

My father, being a man of economy, decided he’d initiate my brother, Dave, who was two years older, and me at the same time. We were told of the appointed date of the talk three days in advance, which gave us time to adequately mourn the loss of our childhood and prepare for the change.

On the big day we were instructed to go to our equivalent of the cave: the basement. The basement of 724 South 45th Street was a manly place with rustic knotty pine walls and chock full of steel tools, stacks of lumber, nails, nuts and bolts and a clanging, belching furnace. And it’s there where my brother and I waited. Waited in silence.

Then we heard the footfalls and saw the shadow of our father on the stairwell slowly lumbering step by step down the stairs. As he reached the bottom stair an earthy belch, generated by the contents of a freshly uncapped Storz Triumph lager, signaled his arrival. He pulled up a bar stool and sat down.

As we waited in anticipation he looked up at the ceiling, down at the floor and then focused on a point just a bit over our heads and proceeded.

“Your mother and I have determined that it’s time for you to know about men and women and the birds and bees. What I’m about to tell you is something that every young man needs to know, because soon you’ll be getting new feelings. They’ll be different than any you’ve had before and they’ll occur when you’re around girls. Those feelings will happen because of your peanuts and it’s important for you to know that you shouldn’t let a girl have your peanuts until you get married.”

“When I was a young man there were a number of girls who wanted my peanuts, and I wanted to give my peanuts to them, but I knew it was wrong, so I didn’t. Wait until you get married. That is the way you should use your peanuts.”

He paused, looked back toward the floor, and then scanned both of us, seemingly looking at each of us in the eye at the same time. “Any questions?”

Dave and I looked at each other and slowly and almost inaudibly said, “No sir.”

We both nodded in agreement. My brother and I watched silently as our father padded his way back up the stairs. He no doubt felt he had fulfilled his manly duty by passing the ancient torch of knowledge from one generation to the next.

As for Dave and myself, despite a mixture of relief and confusion we knew our lives had changed forever. What we were unclear about was when and where we would be given our peanuts.